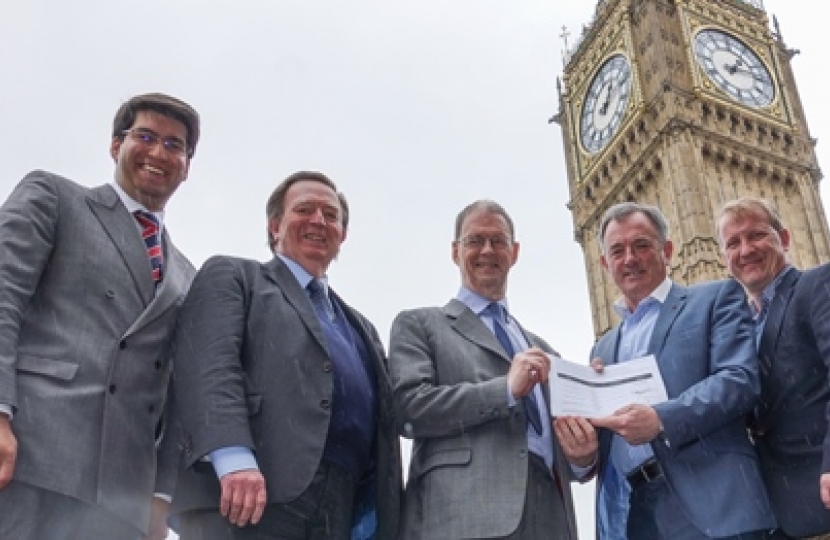 James Arbuthnot, MP for North East Hampshire, will formally present a petition to Parliament about local planning to the House of Commons tonight. In doing so, he will bring to the attention of the Government a problem which has been causing concern in the constituency.

The petition was presented to him by Councillors Michael Morris, Jonathan Glen, Brian Burchfield, and Ranil Jayawardena. It has been signed by over 250 residents of Hook and Rotherwick.

Residents are worried that the current planning system prevents the District Council from properly controlling development in the area. The petition asks that Parliament strengthens the position of District Councils by enabling them to refuse planning permission on the grounds of prematurity, while a local plan is being devised.

Councillors Brian Burchfield, Mike Morris, and Jonathan Glen, Ward Members for Hook and Rotherwick, said today: ‘As three local Councillors, we’re able to work together as a team to defend Hook as strongly as possible. We want to ensure that any new development is not only phased, but comes with real infrastructure improvements. To do this, we need a Local Plan in place and we need the Planning Inspectorate to reject premature development.’

Councillor Ranil Jayawardena, Parliamentary Candidate for North East Hampshire, said: ‘I know that planning is a key issue for North East Hampshire and this petition should help make clear to the Government that it needs to help communities like ours which are caught between a rock and a hard place. Local Councillors are doing their best to defend their communities and get a Local Plan in place, but we need the Government to give them a bit of breathing space to do this.’

The Councillors and the candidate for North East Hampshire in the 2015 general election, Ranil Jayawardena, presented the petition to James at Westminster (see photo).